Hope the holidays have been fun and eventful! Even last week, Yahtzee had some fun as well:

Well, this week his victim is The Saboteur. I did very little research, so NSFW and enjoy!

UPDATE: Is it just me, or are the videos lately have been appearing off these past couple of weeks? I've linked direct links to Yahtzee's holiday cheer and The Saboteur here.
Posted by Unknown at 10:55 PM 0 comments 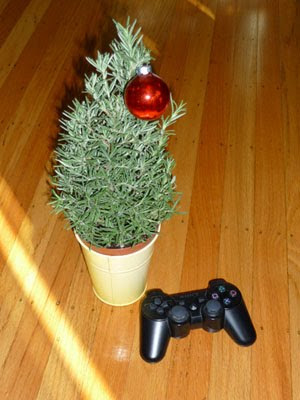 It's the holiday season - a time for social gatherings with friends and family. What a perfect time to gather all those multiplayer games and get people playing against and with each other!

Here are my personal picks (along with some personal experience of "fun" being had) for gaming fun that everyone can enjoy:

The last time I experienced multiplayer was when I played with a couple of Nintendo staff and Charles "It's-a-me, Mario" Martinet back in E3 this year. Since then, I wasn't thinking much on the experience, maybe because I was too star-struck back then. But the second time around, a group of buddies got 4 players going on, and we had a roaring good time!

It's no surprise that friends will be lost, relationships will be strained, and family ties will be severed (I've even heard people call it "divorce" mode), but if you have people that don't mind the abuse, the 4-player ruckus is well worth the time and effort. Sure, you'll have people hoarding items, shoving you off platforms, and picking each other up like ragdoll items...but when everyone finishes the level, you can be sure someone will say, "wanna play the next level?" It's surprising to see my friends progress all the way to World 3 before I mentioned that we had other games to play.

Let's be honest - not everyone can be official rock stars, playing real instruments, and get paying gigs to perform in front of a live audience without sucking a lot. That's why there's Rock Band, to give everyone else a taste of that sensation. Heck, throw in Beatles Rock Band and get 3 mics to perform some triple harmony as a 6-person set. It's probably the best way to get people together and having fun.

And with the constant stream of new DLC songs to purchase, there really is no shortage of songs to rock to. Unless you're SUPER picky of your selection. But you have your selection from the first 2 Rock Bands, Beatles Rock Band, or even Lego Rock Band for all your pop hits. Hey, without Lego Rock Band, you'd never get to play the Ghostbusters song.

There's nothing like being a contestant in a game show, and there are so few games that give that sensation. But until You Don't Know Jack ever returns again with new games, there's Buzz Quiz TV with its 4 wireless hand buzzers. So people can still grab that extra chip or snack, and still be playing the game.

Think 4 players are too little a number? Throw in another 4 buzzers for some 8-player action! That's right, you get 8 people playing at once, giving everyone a chance to screw up on those hard-to-get-right questions. And with extra DLC packs to download, you're never run out of new questions to answer any time soon.

Those are my personal-experience picks to share. Happy Holidays, everyone!
Posted by Unknown at 11:41 AM 0 comments 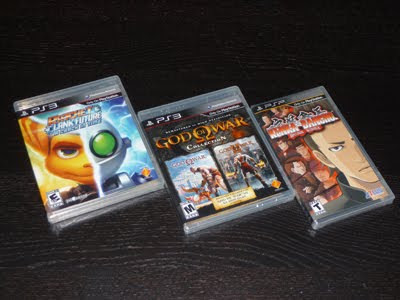 Happy Holidays, everyone! Thought I'd kill three birds with one stone by just making one report on the feast of gaming I'll be making this Christmas so far - Ratchet and Clank: A Crack in Time, God of War Collection, and Kenka Bancho: Badass Rumble. Nothing like saving the universe with a robot and lombax, mutilizing Greek mythology, or getting into weird Japanese high school brawls to get into the Christmas spirit!
Posted by Unknown at 7:24 AM 0 comments

I promise that other worthwhile articles will be appearing soon, but in the meantime this "Lazy Wednesday" thing brings along Demon's Souls as this week's target for Yahtzee and his perverbial wit.

What I keep hearing about the game is that it's hard as fuck, that you'll die several thousand times, and that you'll still keep playing the game despite such harsh conditions. While I have to admit that the use of online's very (and almost inspiringly) unique, Demon's Souls still has the potential to be the first game to make me toss my controller at the wall.

So while I sit here enjoying a bit of cheese with my whine, I still have other, less harrowing games to play through before I subject myself to the self-killing spree that is Demon's Souls.

Enjoy the NSFW video below!

Update: Noticed that the video seems to be a bit off, so here the direct link to the video. 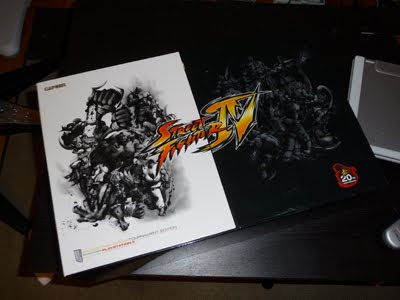 I've mentioned it before, but I'm not a good Street Fighter 4 player. So why do I even have an arcade stick, and the Tournament Edition no less? Well, I've told friends that if I ever get at least 40% better, then I would "treat" myself to the joystick. Well, that, and a chance Amazon "deal of the day" deal sorta clinched it for me.

So, after getting somewhat better in the game (thanks to the less-frequent losses over the past few months), I bit on this chance to get a pricey gaming interface.

But I have to admit, the quality is all there. Real arcade buttons and joystick, hefty controller weight...It's like I ripped the controls off of an arcade machine.

With all the holiday spirits, cold mornings, and busy schedules, I've had hardly the time to even have a "Lazy Wednesday." So this week I bring you two of Yahtzee's witty reviews, covering three games - Assassin's Creed 2, Left 4 Dead 2, and New Super Mario Bros. Wii.

I'd comment more, but I'm prepping more posts to fill out the rest of this week, so I'll just say "NSFW" and "enjoy" for now.